Things To Do In Phnom Penh While Volunteering In Cambodia

When one thinks about Cambodia, the first things that pop up in the mind are the ruins of Angkor – a magnificent architecture from the ancient world that was built during the reign of the Khmer Dynasty. Cambodia has been a popular destination among travelers who were eager to witness this grandeur and headed towards Siem Reap, completely ignoring the rest of things that the country has to offer.

Coming out from a dark period that the country faced during the 1970s, Cambodia has evolved in many ways and tourism has flourished incredibly. The recent trends of backpacking and voluntourism have made this country a popular destination for those who want to explore the Southeast Asian nations on a shoestring budget while effectively contributing towards the developing society.

Although considered to be an underrated capital, if you are traveling to Phnom Penh to volunteer with us, then here’s a list of things that you can do while you are free from your work: 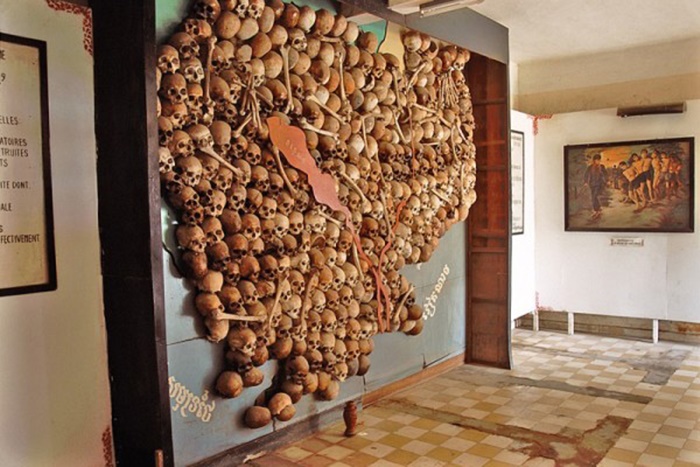 This, undoubtedly, is a place that one must visit and you need to be a brave heart to stand the chills that this place has to offer! An important part of Cambodia’s brutal and bloody history under the Khmer Rouge, S-21 Prison stands as a monument to the 14,000 men, women and children who were murdered or imprisoned here during the 1970s. This former school has now turned into a museum and it holds the spine-chilling cries of those people at every corner. A tuk-tuk ride from this museum will take you to the Killing Fields, located at a distance, which will depict the continuation of the tragic past. Walking down the narrow trails of the woods, you’ll see more than 8000 skulls lying there and it’s said that there are graves of more than 20,000 people! This place will surely change your way to look at life and your perception about human brutality. 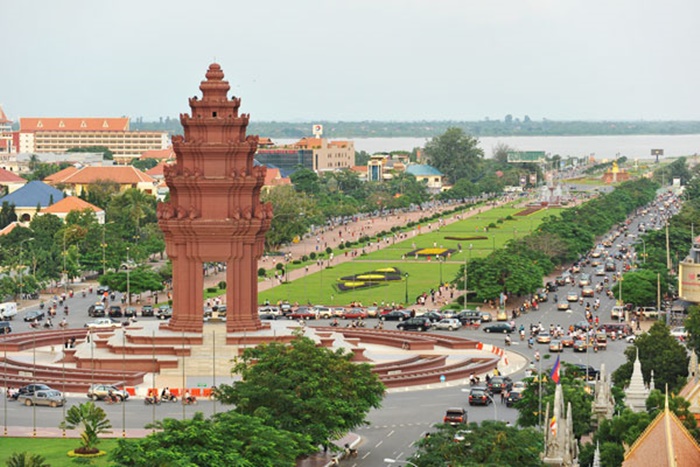 Located in the heart of Phnom Penh City Centre, Independence Monument is the symbol of Cambodia’s liberation from the French who had colonized the nation between 1863 and 1953. The best time to visit is at night as that’s when Independence Monument and its surroundings are illuminated by blue, red and white floodlights. While there are many such places to remind you of the country’s dark past, this will surely signify glory and victory. 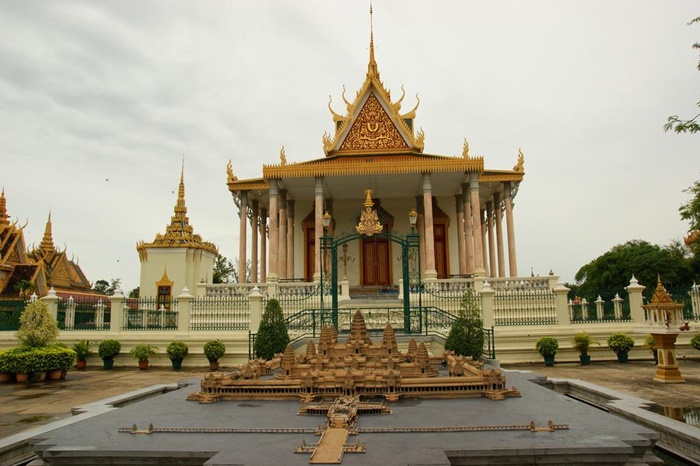 Moving from a dark past, these places will portray the glory of the Cambodian rulers. The Royal Palace and Silver Pagoda are set adjacent to each other, spanning 174,870 square meters of lush greenery and breathtaking Khmer architecture. The Silver Pagoda is also known as the Temple of Emerald Buddha. This is one of the few places in Cambodia where bejeweled objects embodying some of the brilliance and richness of Khmer civilization can still be seen.

Cruising on the Mekong River

This would be an experience in its own, as you take a boat ride on the Mekong River with the local Cambodians and observe them. Take a boat from Sisowath Quay to view the Royal Palace and National Museum from the water, or spend a couple of hours marveling at the floating villages and this unique way of life. The best thing would be to go for the sunset cruise, as the sky paints itself in beautiful shades at that time. There are certain cruises that connect Cambodia with Vietnam as well, as the Mekong River flows through both the countries. 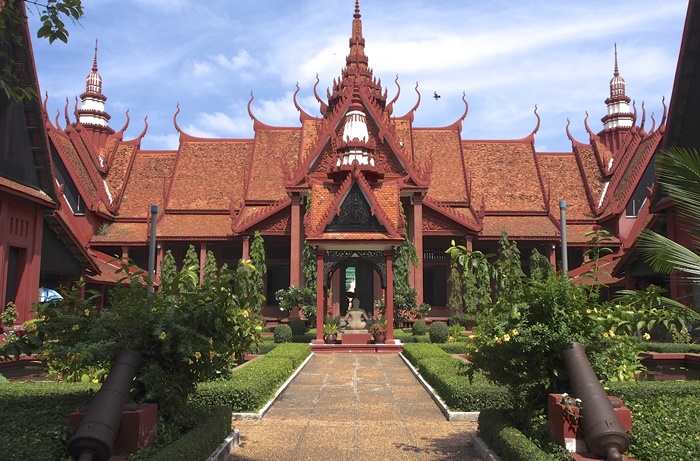 Yet another place of immense importance, the National Museum of Cambodia is the country’s largest archaeological and cultural history museum. It’ll enable you to have a glimpse into the cultural side of Cambodian history dating back to the 4th century, and understand the mix of Hindu and Buddhist cultures that coexist in the country. One of the most spectacular exhibits in the museum is an eight-armed statue of Lord Vishnu that dates back to the 6th century.

Shop at the Central Market 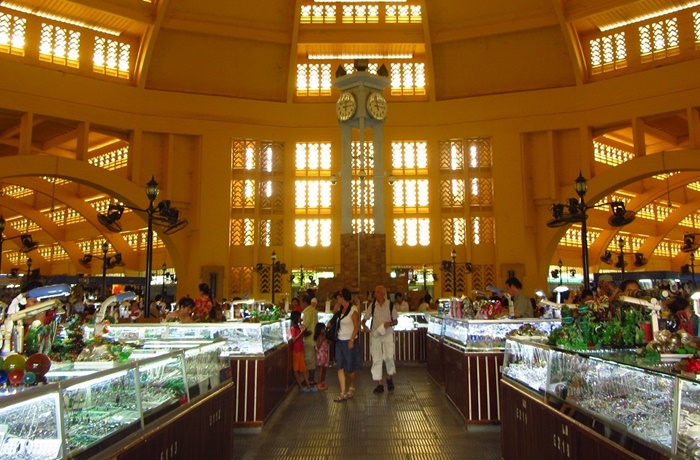 The Central Market is the best place to shop in Cambodia, and of course, who doesn’t want to take back souvenirs while returning from a volunteering trip? You should be a master and bargaining and that way, you’ll get the best deals! Designed by French architects Jean Desbois and Wladimir Kambouroff, this indoor market was the largest of its kind in Asia when it was constructed in 1937. Experiencing the lively atmosphere and enthusiastic haggling at the market is one of the most fun things to do in Phnom Penh, and you’ll find everything here – from clothes and bags to gadgets of your choice and mouthwatering food as well.

Savor the tastes of the local Cambodian Cuisine 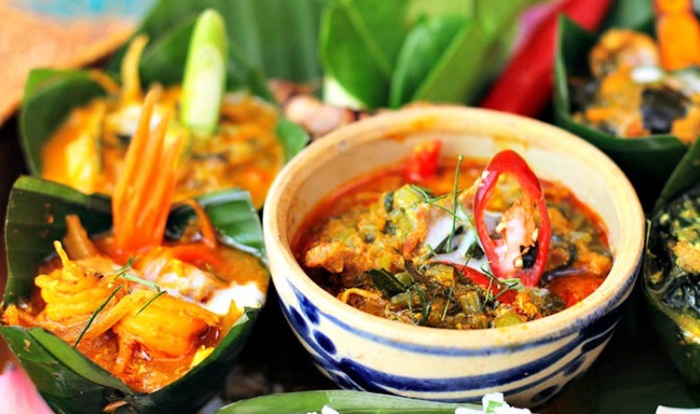 This is the best part of a volunteering journey – it gives you an opportunity to stay close to the locals and try the local dishes that staple for the people. The Khmer cuisine has some authentic flavors that can’t be found elsewhere in the world – and you must not forget to try amok (coconut fish steamed in banana leaves), sticky rice with mango and Kampot pepper crab. Walk down the streets to get some delicious snacks from the roadside shacks, and try the seafood at some of the best stalls around Tuol Tom Poung (Russian Market).

Explore the nightlife in Phnom Penh 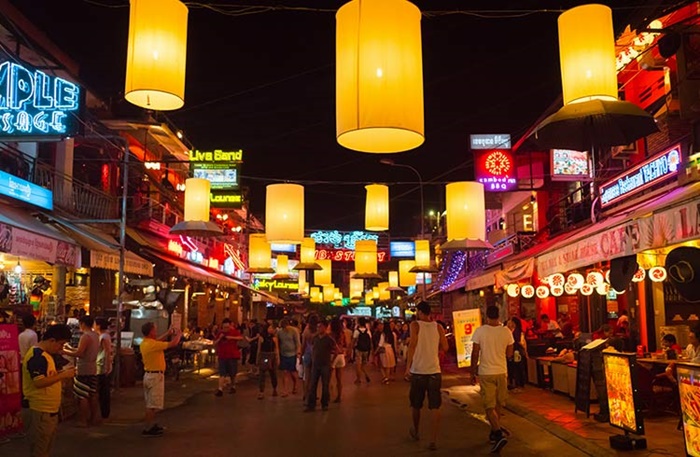 The city changes its colors as daylight fades away, and you’ll surely fall in love with Phnom Penh’s nightlife! You can either go for a movie at the Empire Movie House, open until 11 pm every night with daily screenings of the 1984 drama, The Killing Fields (definitely one to see in Cambodia) or just sit at any of the roof-top bars and enjoy your drink!

P.S – Don’t forget to seek permission from the in-country coordinator before heading out at night. Although Cambodia is a safe country, we would suggest not to go out alone at night, especially if you are planning to grab a drink.

These are the things that you can visit even on the weekdays, after completing your volunteering work at the project site. Apart from the above-mentioned places, there are several Wats that you can visit as well. And for the weekends, the best plan would be to head towards Siem Reap to see the Angkor Wat.

You can discuss your plans with the in-country coordinator, who can guide you in planning your travel itinerary. If you have further queries regarding volunteering in Cambodia, you can drop us a mail at [email protected]

Hope you’ll have a great time volunteering and exploring Cambodia!